From Photograph to Painting 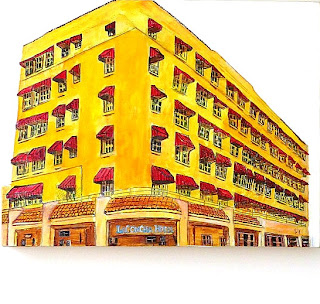 I grew up in a big megalopolis and even afer living in the suburbs for the last thirty years, I am still a cityl girl at heart. Cityscapes inspire me. I am too self conscious to park my easel on the street and start painting. So, I do the next best thing. Take photos and then when time permits convert them into painting. Below is one stuch attempt:
The image below is a photo I took of the famous La Concha Hotel in Key West. (Legend has it that Tennessee Williams wrote his most celebrated play, A Streetcar Named Desire, while staying at the hotel.) I don't know how it was during Williams' stay, it now looks like a relic of the past, albeit a well preserved one. Staid and stodgy, it reminds me of Downton Abbey. Yet, I liked the symmetry of the awnings and the uniform shadows they cast over the windows and I felt that I could make it into a painting with some color changes. No way was I recreating that beige and blue glory! 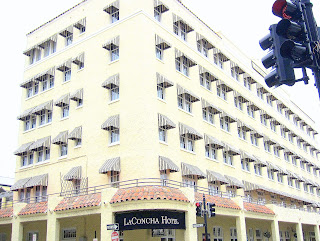 Since there are lots of details in the photo and I wanted to get to the coloring part fast, I took some short cuts.  Here are the steps I used to create the painting (top photo):


Steps:
1. Using Picasa, I created pencil sketch version of the photo (it is one the effects available on Picasa) and printed a copy of it. The sketch effect is also useful for identifying the light and dark values. I also printed a copy of the original photo in color.

2. I sketchd the image on the canvas using the balck and white print as the guide. 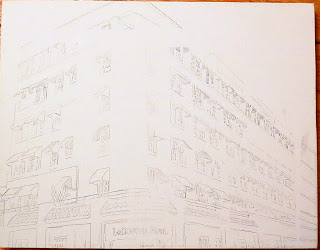 4. Using a thin brush and acrylic ink, I went over the lines ( I could have used a sharpie too). Acrylic ink is permanent and the lines will not smudge when color washes are painted on top.

5. Instead of the beige and blue in the original, I decided to use yellow, red and orange color scheme. 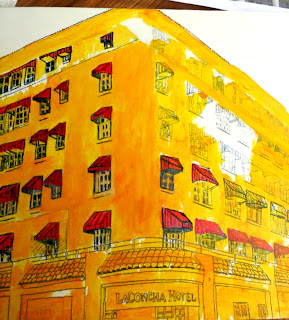 6. I layered the colors in various stages, starting with a wash of yellow first. Note: Golden fluid acrylics are very strongly pigmented and a little goes a long way. 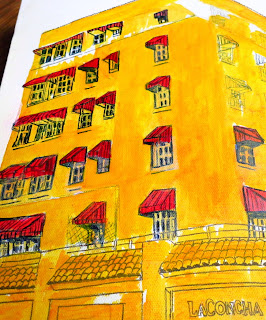 7. Here is the finished painting. Now, it looks like it belongs in South Beach, Miami rather than
Key West! Well, I did not set out to make an art deco version but it kind of made itself. The thing about using a photo as a model for the painting is that you have the freedom to alter, add, subtract, edit, colorize in any way you want.  There is nothing that says you have to make an exact copy of the original. The photo represents one version of reality and the painting another and both are true. 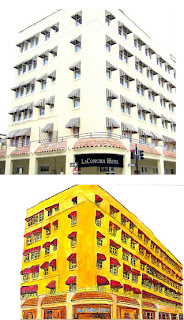