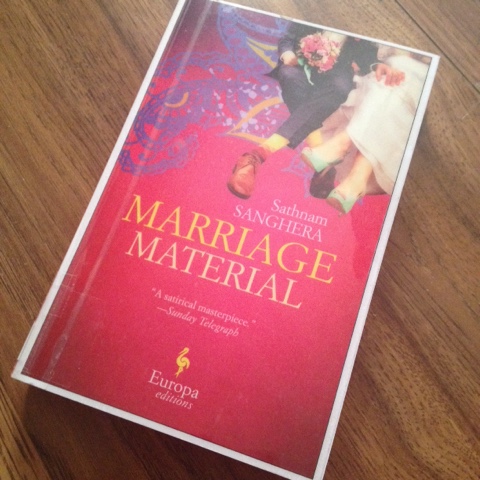 Told with tenderness and occasional caustic humor, Sathnam Sanghera’s Marriage Material is a novel about three generations of a Sikh family settled in Wolverhampton, England. The familiar ingredients of this genre, struggle, filial duty, inter-generational conflict, cultural misunderstanding, language barrier, assimilation, to name a few,
are present.However, Mr. Sanghera gives the story an unexpected hard edge with an unsparing look at old world prejudices and new world jealousies that also shaped the immigrant experience and, by making the virulent, anti-Sikh crusade of Enoch Powell who had his parliamentary seat in Wolverhampton in the 1960s a live presence in the narrative.

The story begins with Arjan Bhanga, a thirty-something  graphic designer living in London and engaged to an Englishwoman, who returns to Wolverhampton upon his father’s sudden death from heart attack. Once the initial shock and grief is over, Arjan, an only child, is confronted with the question of what to do about his ailing mother and the failing family-owned business, a dilapidated looking corner shop where “the security shutters are often stuck a quarter open”, and “a push or kick of the door triggers something which is more ‘grating alarm’ than tinkling shop bell’. Intersecting with Arjan’s present day predicament is the story of his grandfather referred to as Mr. Baines, a twice displaced Sikh (first from Pakistan due to Partition and later from India due to poverty) who worked in a foundry for several years before saving up enough money to buy what would become the Baines Store and to pay for his wife and his two daughters, eleven and fourteen years old, to finally join him. The life paths of the two daughters, Kamaljit and Surinder, can be simply described as one of “those who leave and those who stay” (to borrow Elena Ferrante). Kamaljit, plain and traditional, stays back to marry her father’s assistant at the store, Tanvir Bhanga, a low-caste Sikh, and runs the store along with her husband after her father’s death. Neither one are particularly competent, but together they manage to keep a roof over their head and give their son, Arjan, a college education, that ticket into middle class professional life. Surinder, pretty, ambitious and an excellent student, repelled by the prospect of a marriage to a forty-five year old Sikh widower, literally runs away from home with a traveling Irish salesman. Though that union ends badly, Surinder establishes herself as a successful entrepreneur. When the story circles back to Arjan, his mother and his aunt have not seen each other for nearly forty years.

Arjan, for his own reasons, reunites the two sisters, and the rest of the story revolves around the remaking of that relationship out of ruptures of the past. Here the novel acquires an emotional depth and, the sisterly bond, made of equal parts of love and prickliness, is touchingly told. There is that tender moment when Kamaljit pulls out an old newspaper clipping of Surinder’s A-Level scores or when overcome with the memories of their mother’s cooking the sisters bawl over a plate of roti and saag. Yet, when Surinder sells her business to move in with her sister, their living arrangement bristles with the same annoyances and dark mutterings of their teen years. Unsurprisingly, Surinder, childless herself and sympathetic to Arjan’s assimilative and middle-class yearnings, has a much more easygoing relationship with her sister’s son. When Kamaljit passes away, it is the warmth of this adult relationship between aunt and nephew that help make the Baine-Bhanga family whole again.

Marriage Matter is an immigrant success story but as Arjan insists in the prologue, the “life of the Indian man who originally set up this newsagent was not a cliché” and nor was his father’s, who too “in his way struggled to be seen for who he was”. To which, I will add his grandmother, mother and aunt. As the story amply shows, the struggles and successes were not just men's alone. The women too toiled but their burden was double since it was not just racism that they had to overcome but also the patriarchal structures that severely limited the choices available to them.