Sari Wall Art : All about Love 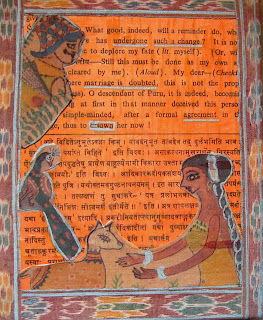 The inspiration for this artwork comes from the Sanskrit drama Shakuntalam. Shakuntalam (Story of Shakuntala)is considered a masterpiece of the classical Sanskrit Indian drama. Composed by poet Kalidasa, it dates to the reign of Vikramaditya (5th cent A.D) described as the the golden age of ancient India.

The original story of Shakuntala is a small chapter in the Hindu epic Mahabharata. It is basically a love story with all the familiar ingredients such as love at first sight, promises broken and redemption and reunion. Its protagonist is Shakuntala. Born to a celestial nymph and a human, she is abandoned at birth by her parents and is raised in a hermitage. One day, Dushyanta, the king of Hastinapura (Delhi) comes hunting in the forest and chances upon the hermitage. He and Shakuntala fall in love. He gives her a ring with a royal seal and pledges to send for her after returning to his kingdom. And things start going wrong for Shakuntala.

Due to a sage's curse, the king loses all memory of her and fails to send for her. Shakuntala, now pregnant, travels to his palace. However, on the way she loses the ring the king gave her and is unable to show any proof of their involvement. Heartbroken, she returns to the hermitage and in due course gives birth to a son. A few years pass by. Meanwhile, the ring is found and returned to the king and, as soon as he sees it he regains his memory of Shakuntala. Determined to right a wrong he goes looking for her. At the hermitage he sees this this young kid playing with a little lion cub. Impressed by the little boy's courage he asks him his name and the child answers "I am Bharata, son of Dushyanta". Deeply moved, he picks up the child and just then Shakuntala comes looking for the boy. Of course, all misunderstandings are cleared and the couple are reunited. The king, Shakuntala and their son return to Hastinapura and after his father's death, Bharata becomes a powerful and a famous king. It is said that Bharat, another name for India, comes from its most famous king, Bharata, the son of Dushyanta and Shankuntala.

Shakuntalam was the first Indian language drama to be translated into English by Sir William Jones in 1789. It is also the subject of an Italian opera. It continues to be a source of inspiration to dancers, musicians and other artists including my inspiration for this sari wall art
Posted by Indira at 11:37:00 AM