Altering an Old Calendar into New 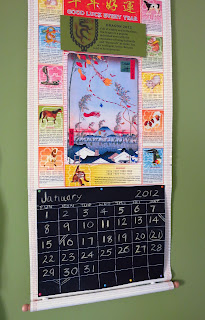 It always seem that at the beginning of the new year one does not seem to have enough calendars for use. Typically, I need one for each room in the house, plus one for the office. I also like to have the religious calendars like the one I get from the temples which are marked with all the Hindu festivals, moon's phases etc,. 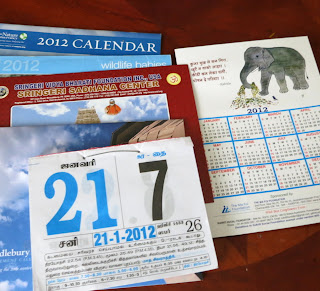 Sometimes, I also like to repurpose old calendars into new like the one at the top of the page. It was originally a 2010 calendar I got from a local Chinese restaurant. Shaped like a scroll, in plastic (!), it was the usual kitschy stuff, except that it was a zodiac calendar. I like anything zodiac, so I kept it even after the year was over. As 2012 was approaching, I decided to reuse it with some alterations. These are the alterations I made: 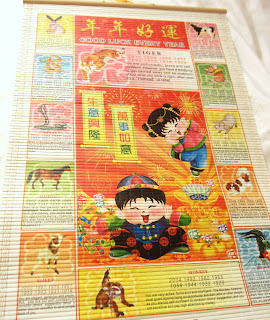 1. I kept the "Good Luck Every Year", since it was neutral year wise. 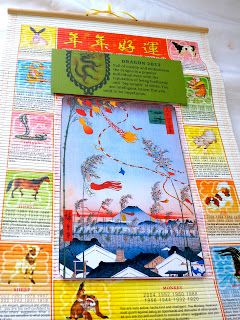 2. I replaced the year of the Tiger (2010) with the Year of Dragon 2012. Using the word processing software,  I composed the Year of the Dragon with text and image and printed it on a green card stock. I laid it over the over the old text using glue dots.

3. I replaced the cherubic images of bouncy Chinese children with a colorful Hiroshige woodblock print of Tanabata Festival.

4. For the calendar part, I adhered a square of chalkboard cloth over the old calendar with brads. Then drew the grid for the month of January 2012 using chalk and white Gelly roll pen. 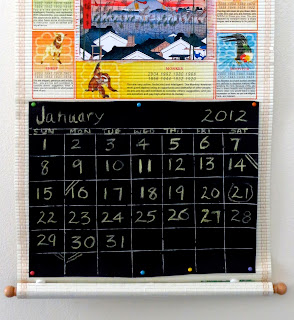 Each month, all that I need to do is to wipe off the chalkboard and create a new grid for the new month. I look forward to it with pleasure.
Posted by Indira at 3:25:00 PM