I am reposting this post for Seth Apter's Buried Treasure 2011. Enjoy. 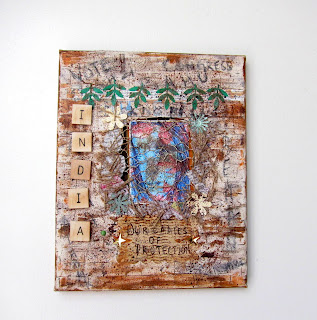 In a place where sex-selective abortions are a fact of life across all segments of society, the latest general elections in India has produced four female chief ministers governing over a combined population of 400 million people. As if that is not enough, an Italian-born woman is the head of the historic party that led India's independence movement, the President of India ( non-elective position) is a woman and so is the speaker of the Indian parliament. Middle aged or older, widowed, single, never married or "married" to a woman, these top-dog politicians are not hot babes. (They will never make it to the style section of the Huffington Post.) Their ascension to top positions has less to do with gender politics than with the caste politics. Skilled politicians all of them, they can play dirty as well as any of their male counterparts. Yet, their popular nicknames ground them in the typical Indian family structure: one is called "bahu" (daughter-in-law), another is known as "amma" (mother), a couple of them are referred as "didi", "behenji" (sister), yet another is known as "auntieji" (aunt).

The mixed media art above is a tribute to these women as well as to the system that produced these remarkable politicians. Mimicking the grimy, tacky and the garish nature of Indian politics, the background is a wall graffitied with election slogans. Acknowledging the fact that Indians can create a sacred space anywhere, the shrine is a hole in the wall decorated with plastic and paper flower garlands. The image is and could be of any woman seeking political power and the thin screen covering the shrine can be pulled back anytime by her to step up to the podium.

If you are interested in knowing more about these female politicians, here is a link to an excellent article by the Globe Mail of Canada

The fun part is  of doing this piece is that every material used in this art came from the members of the Etsy melange swap (canvas and paints excepted), consisting of images, embellishments, vintage papers, die cuts and scrabble tiles from Artsnark, Whyte, Elenamary, Midwestielady, JBguess, LDphotography. Thanks ladies!