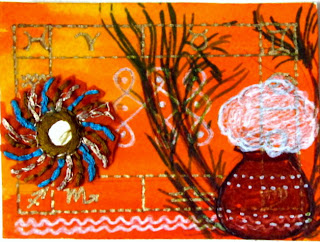 I am currently in Chennai, Tamilnadu, India visiting my sister. Entire Tamilnadu is gearing up for Pongal, a three-day festival, starting on January 14. Pongal, which  means "flow over", is a harvest festival, but celebrated by all Tamilians. The most popular icon of Pongal festival is a cooking pot with a sugarcane shoot tied to the side and, brimming over with steaming rice. Pongal celebrates the transit of Sun into the sign of Capricorn (Thai) and the beginning of uttaranayana punyakala or the northern ascension of the Sun (its 6-month transit over the northern hemisphere). Hence, the month of Thai  is also celebrated as the season of hope and new beginnings. You can read more about this festival in the post I did last year .

To commemorate the beginning of new season of light and hope, I created the aceo above as a response to Mixed Media Monday Challenge: Size Matters. This is a first for me, since my usual canvas size for mixed media is 8" by 11".  I have found the idea of creating art on a canvas measuring just 2.5"X3.5" both intimidating and fascinating. Now that I have done it, I am hooked. This artwork is also a response to Etsy Melange Team January Challenge Beginnings.