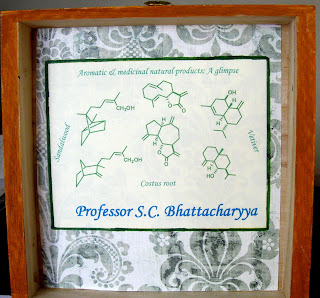 What do you give to a scientist who has been more interested in pushing the frontier of science than the material gains accruing from it? A pioneer in essential oils research, Prof. S.C. Bhattacharyya, celebrates his 92nd birthday today at his daughter's home in California. When my husband, who did his Ph.D under him, wanted to buy one of my boxes as a token gift for Prof. Bhattacharyya, I kind of laughed and told him that the boxes were too feminine and not very appropriate for a scientist and that I would make special one.

I met Prof. Bhattacharyya only ten years ago. I found him a wonderful human being. His impact on me, as it has been for all those who had worked under him, was as a brilliant chemist. So, I decided to highlight that aspect of his life in this collage box . 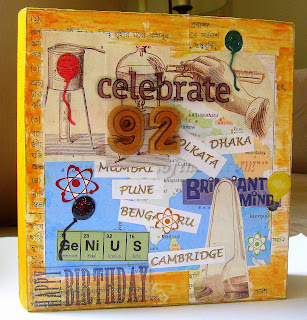 He is a Bengali and like all Bengalis very proud of his cultural heritage. So, I started with a Bengali poem printed on the background paper. He graduated first in his M.Sc class from Dhaka University, back when it was part of undivided India. He completed his doctoral work at the premier Indian Institute of Science at Bengaluru. It was here that Prof. Bhattacharyya did his breakthrough work in the sandalwood oil chemistry.. Soon after, he went to Cambridge, England to get his second doctoral degree.

Upon his return to India which by then had become independent, Prof. Bhattacharya began his long and illustrious career at the National Chemical Laboratory in Pune where a division of Essential Oils was created just for him. The research group under his leadership gained international recognition for pioneering work in natural product chemistry and on macrocyclic musk compounds. One of the biggest discoveries was the isolation and the structural elucidation of constituents of sandalwood oil, which is one of the major essential oils today. (No, he did not patent or profit from it.) From NCL, he moved to IIT Bombay which was where my husband did his doctoral work. He finished the final years of his career at the Bose Institute, Kolkata.

It was this arc of his career that I captured on the cover of the box. When my husband saw that, he asked me if he could add something more. I said yes and he came up with what you see on the inside of the lid--the chemical structures of three of Prof. Bhattcaharyya's major discoveries! Immediately, I knew that it made the idea behind the collage whole and completed the picture. An artist and a scientist coming together, truly an inter-disciplinary project!

Of course, no amount of images can capture the deep humanity of Prof. Bhattacharyya--what made him an incomparable acharya. In Sanskrit, acharya refers to a teacher, but, in the true meaning of the term, an acharya is a guide, mentor, advocate, parent, minister, counselor and a teacher. It endows the bearer of the term with responsibilities beyond the mere transmission of knowledge to the students. My husband would agree that he was an acharya in the truest sense.
Posted by Indira at 9:01:00 PM